Prior to listening to Fully Poseable the idea of getting a Mint on Card (MOC) action figure autographed never even crossed my mind. I’d never been a huge autograph guy, especially in the sense of just getting someone to sign their name on a piece of paper. Yet, something happened as I first listened to Scott and Jef detail their adventures at conventions or recalling past memories of meet and greets. My brain started to roll into overdrive as I thought about all the missed opportunities I’d had where I could have gotten some autographs.

The first opportunity I had I made sure to jump at the chance. As with anything, it came with some mistakes and situations that I had to learn from. So if you’re new to the autographed figure game then do yourself a favor and learn from a few of  the mistakes I made.

What Kind of Collector Are You?

The best thing to figure out right away is exactly what kind of autograph collector are you going to be? Will you be a person that only wants to get an autograph yourself to make a memory or are you ok with purchasing autographs online or second hand?

There are many places such as Highspots, Figures Toy Company, Dark Parlor Originals, and many more that offer the option to purchase autographed action figures or Funko Pops that come with a Certificate of Authentication to assure what you’ve bought was signed by the person. Sometimes there are opportunities to buy them autographed straight from the wrestelrs.In a time where there are fewer chances to hit meet and greets or conventions, it’s an option there for people open to it. 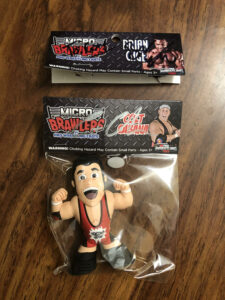 An example from my life, if a wrestler has a micro brawler, it’s always worth trying to see if that person is selling their brawler on their site or through social media. Colt Cabana, as of writing, has a two pack of brawlers for sale on his site. He signed both of mine, one I opened and one that I kept packaged up. I reached out to Brian Cage via Instagram to purchase his. I didn’t ask for it to be autographed, but it still came signed. I opened it, but I still kept his autograph.

However, ordering online isn’t for everyone. There is a sect of the autograph community that wants to do the work themselves. They want to hand the figure to a wrestler they look up to, have that conversation with them, make that memory. There’s nothing that beats looking at a figure on your wall that you have autographed only to make it spark a memory of getting the figure signed or even the hunt you did to get the figure. Doing it in person makes it all the more special and personal.

I’m a mix of both. I’d prefer to get in person autographs, but I’m also aware that my options are limited so in order to make my collection grow I’m ok with spending some money online. 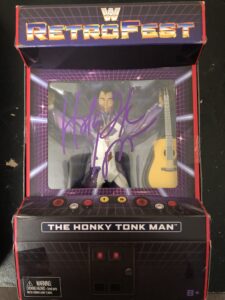 If there’s one rule to make sure to listen to, make it this one. CHOOSE YOUR PAINT PEN COLOR WELL! When I got my Retro Fest Honky Tonk Man signed, I thought it would be a great idea to use a purple paint pen. After all, the box is purple! It will look perfect. Unfortunately not. From a distance you can’t even tell there’s a signature on the box. It just blends it with it all. When you get close? Yeah, clear as day, a beautiful signature from Honky.

Use POSCA paint pens, or any brand of paint pen over a sharpie. Over time a sharpie will fade away leaving you only a faint memory of your experience and autograph. Paint pens are superior in every single way, so just get familiar with them off the rip. 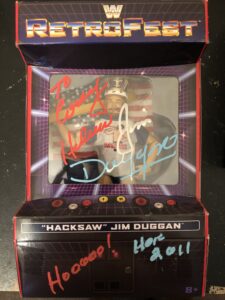 I’ve heard the expression “playing paint pens” on the podcast once or twice before. It’s a true essential task, especially for anyone that hasn’t used them before. I suggest watching a Youtube tutorial or two if you’ve never used a paint pen as they aren’t as straightforward as one would think.

It’s good to have a plastic trading card case to shake your pen up and write on to get working before you hand it over to get signed. It helps to make sure they’re working correctly and not running. I didn’t test out my white paint pen before Hacksaw Jim Duggan signed my Retro Fest in red, white, and blue. The white was a bit runny and bled into the blue below it. It didn’t ruin it, but it could have looked even better than it does. 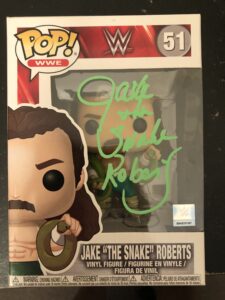 You’ll want to practice patience when you finish getting a signature when using a paint pen. The paint pen doesn’t dry in an instant. I learned this the hard way after my first autograph experience. I had a Jake the Snake Funko Pop signed but was a little quick to toss it inside of my tote bag. This resulted in a bit of a smudge. It’s not noticeable from far away, but when you get close it’s easy to spot which always bums me out a bit.

A safe carrying device is also essential. You don’t want to have to toss a bunch of autographed figures in one thing and risk them banging together or mixing paint on things. Make sure you have your protection with you because as we’ve been taught since middle school, using protection is always important.

It’s easy to be at a convention only to get a little overwhelmed by all that’s going on or even get a little star struck when meeting someone. It’s an odd experience at first, this person you watched on TV for so many hours is now right in front of your face.

Take the time to stop, breathe, and enjoy it. Tell them an anecdote that might make them smile, let them know how much you enjoy their work, and just be happy you’re there. I arrived at an indie show early, the signings hadn’t started yet. Honky Tonk Man and Baron Von Raschke were at their tables waiting for it to start. I could have been annoyed that I was standing under the beating sun waiting for an arbitrary start time when they were both right at their table, but I didn’t. I took the opportunity to just listen to two pro-wrestling legends talk shit and catch up. It was like listening to a podcast that no one else gets to hear. These experiences don’t happen for everyone super frequently, so just enjoy the little things.

I’m still learning, so if there’s anything I missed out on, feel free to hit me up at my Twitter to let me know!