I’m a collector of collections. I have my own personal library of books, enough DVDs and blu-rays to start a home theater, Stephen King books, a coffee cup from every place I’ve visited over the last five years, ticket stubs from events I’ve gone to, and the thing that we can likely all agree on, action figures. While the things mentioned are collections that have been growing for a double digit amount of years, my journey into becoming a ‘serious’ figure collector was a long road.

A part of my soul becomes filled with an uncontrollable envy when I hear people recount a childhood that came with an abundance of toys. My childhood certainly wasn’t void of toys, I did come from a poor family so I wasn’t being bombarded with new things each week. Plus, I was a shitty kid that had wrestling matches that were only slightly less violent than an ECW match, soooooo that didn’t help a thing.
I adored action figures, especially wrestling, but my Figure Federation wasn’t limited to wrestling. Between the infrequency of new figures and my penchant for putting on wrestling matches that would leave figures injured (aka broken), it was up to me to include Swamp Thing, Power Rangers, Ninja Turtles, or whatever bootleg toy I found at a garage sale into play. I made it work though, and never cared about different scales or lines. Figures were about using my imagination, something I had a surplus of.

If there was one thing more rare than getting figures, it was getting a ring. As a child all I ever wanted was a wrestling ring. Unfortunately my little badass ways left the one ring I did get looking like the end of a Big Show and Brock Lesnar match up. Never one to give up though I’d make rings out of clothes baskets, Lincoln logs, or pure imagination on that Willy Wonka swag.

For about 10 years after my teenage years, I bought sporadically. A wrestling figure here, a figure of a movie character there, nothing too insane. There weren’t any specific lines that I felt I needed all of though. Eclectic collecting if you will [/Dusty Rhodes Voice]. While I’ve always been faithful to my relationship with wrestling figures, I did have a brief affair with Funko Pop. I went from one or two all the way to 15-20 fairly quick, especially falling in love with anything from the comic book SAGA. 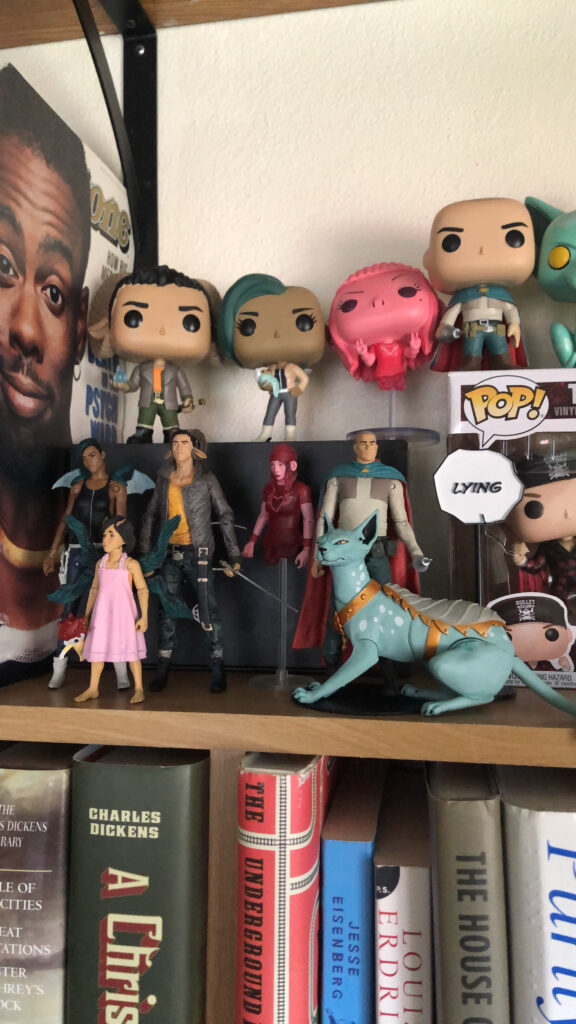 I would have likely let that fling turn into a lifelong romance, but wrestling figures popped back into my life like Topanga showing up at Cory’s door in the rain, except in the form of podcasts.

It wasn’t until I discovered the world of wrestling figure podcasts that I learned there’s not only an entire community of people that collect wrestling figures, but a whole culture around it. I was in awe learning that people not only knew what figures were currently out, but discussed figures coming out later, or reminisce about the figures I used to love. This thing that I always felt weird about loving because I didn’t know anyone else loved suddenly had a place to go where I could be a nerd, and not even the biggest nerd to boot. 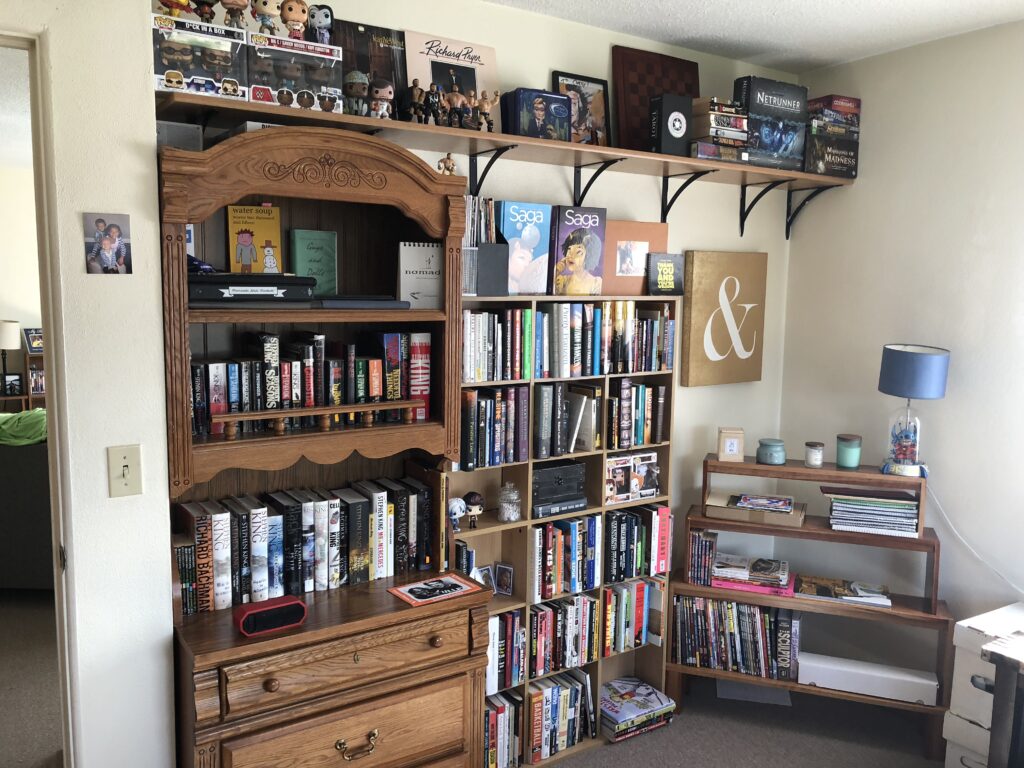 Humble beginnings as a book and figure collector.

Everyone’s official collection has to have a start. Mine started with a collection I completed and a collection that’s since been abandoned. Being a Minnesota boy, I wanted to collect a figure of every wrestler born or lived in Minnesota. I quickly abandoned that large task as I started to realize how many wrestlers from Minnesota I don’t even like.

The collection that gave me that chase the dragon feeling was the retros. When series one hit I saw a set at Walmart, the feelings of nostalgia smacking me like a chop from Walter. I grabbed Kevin Owens, never thinking of buying another. Knowing that was sitting in my closet I decided I was going to collect retros of my favorite wrestlers released. Then out of boredom I bought a Goldberg, someone I have no real love for, and as I walked I out of the store I could only think one thing. God damn it, now I need every single one.

Since then I’ve completed the retro collection, amassed around 50 Elites, backtracked to grab some of my old favorites from other lines, big shout out the the Saturday Night Live Nat X, Simpsons Stephen King, and all the Saga figures to name a few, and now you could say I’m “all in” on anything All Elite Wrestling has released. I know it’s not the biggest collection, I know it’s not the fastest growing, but I can’t help but to feel wonderful when I lay on my bed looking at my library with my figures hovering above. 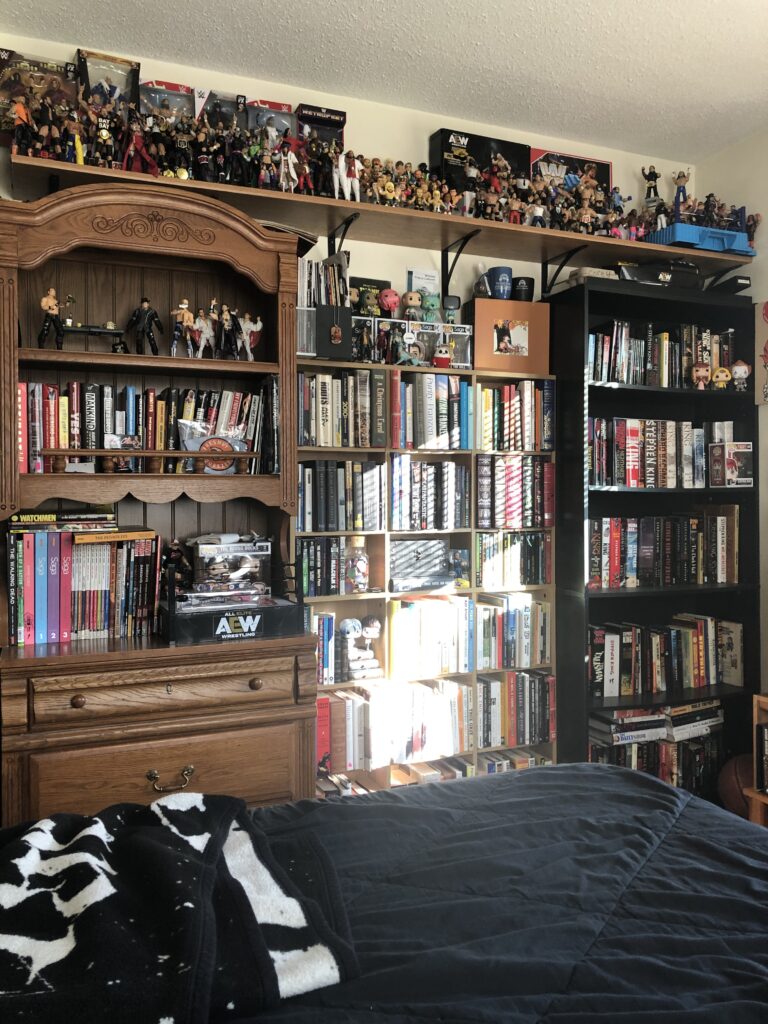 My current view when I wake up.

I worry about where it will grow. With only about two years of serious collecting I’ve already run out of space. By the end of wave three of Unrivaled I’ll really have run out of space. At some point something will have to give…or I’ll get a bigger space. One of the two. I’m sure collectors will know which one.